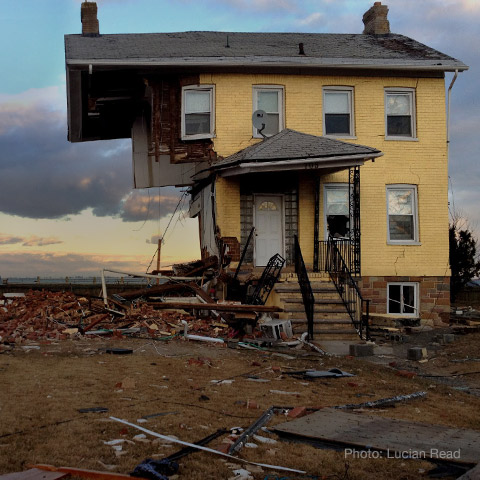 The latest episode of Years of Living Dangerously takes a look at the political and often partisan constraints of advancing climate change policy and resiliency efforts. New York Times columnist Mark Bittman and actress Olivia Munn take the audience through thematically similar stories on opposite coasts of the U.S. In the end, both stories leave us with little doubt that avoiding the issues surrounding climate change will actually leave us worse off economically and environmentally than if we addressed them.

Bittman explores the paradoxical nature of New Jersey’s rebuilding efforts in the aftermath of Superstorm Sandy. He observes that while mainstream media highlighted the heroic disaster relief efforts and “above politics” partnerships that generated billions of dollars in aid, there was a missing piece of the story – or two words to be specific – climate change. Governor Chris Christie’s public position throughout the post-Sandy months steadfastly avoided recognizing climate change as a component of the storm’s strength. Ultimately, this led to rebuilding efforts based on historical flooding data, not future projections. In contrast, Bittman’s interviews with climate scientists, such as Michael Oppenheimer, posit that Sandy was stronger because of sea level rise due to climate change and that sea levels will rise faster than the global average on the northeast coast of the U.S. Through the lens of a town hall meeting in hard-hit Union Beach, residents (and viewers like me) are left with the unsettling projection that 100-year storms like Sandy could begin happening every five years. Are New Jersey’s coastal residents being left vulnerable to another inevitable superstorm?

On the opposite coast, Olivia Munn follows a story about the challenge of tying climate change to policy in the state of Washington where (at the time) newly elected Governor Jay Inslee was voted into office on a platform addressing climate change and clean energy jobs. At first, Governor Inslee is seen as a beacon of hope, and he is noted as the greenest governor in America. Inslee shares with Munn that working together through bipartisan efforts is the best way to get things done. The optimism quickly fades, however, when his house-introduced climate action bill is redlined to the point that the words “climate change” are no longer found in the bill. Noting from his experience in Congress that this type of compromise is inevitable, Inslee signs the revised bill declaring it a victory. Furthermore, Inslee sets sights on a bigger goal by joining forces with other governors to pledge to reduce emissions along the entire west coast.

There are at least two sides to every argument. In this episode, we saw short-term economic concerns juxtaposed with long-term climate change risk. We saw Republicans pitted against Democrats battling over tough priority issues. But are economic concerns and climate change risks really at odds? At EDF, we are bridging the gap with programs like EDF Climate Corps that combat climate change while focusing on short-term economic savings. Regardless of your position on climate change, we can all get behind common sense decisions that save both energy and money – that’s why EDF has been working with companies to identify the operational savings of smart energy management. Just as businesses can no longer afford to maintain the status quo, and as all of who have been watching Years of Living Dangerously know, our planet cannot afford the continued pace at which human generated carbon is warming the atmosphere.

To learn more about EDF’s work tackling the world’s most pressing environmental problems, tune in to Years of Living Dangerously on May 26th to watch as three of our EDF Climate Corps fellows identify energy saving opportunities that have impressive economic benefits.

As Program Coordinator for EDF Climate Corps, Jacob's primary responsibilities are to recruit fellows and host organizations, manage summer fellowships and lead key operational processes such as pre-fellowship preparations and the vetting of fellowship results.