Chris Anderson spent his summer steeped in the grocery retail world as a Climate Corps fellow at Giant Food Stores, headquartered in Carlisle, Pennsylvania. The chain of 150 grocery stores is part of the Ahold family of quality supermarkets based in the U.S. and Europe. A joint law/business student at Penn State, Anderson identified several promising opportunities for cost savings and energy efficiency improvements at Giant Food Stores.

During one facility tour, Anderson found himself looking at freezer doors, wondering why some had heaters while others had more energy efficient anti-fog film. By probing beyond the initial answer, he uncovered an anti-fog product that could be retrofitted on existing doors which, if implemented at 2/3 of stores, could reduce CO2 emissions by 26,000 metric tons per year and end the inefficient practice of heating up freezer doors.

Anderson also calculated that if Giant Food Stores were to retrofit 1/3 of its 150 stores in the chain with skylights, the company could avoid over 13,000 metric tons of greenhouse gas emissions per year. As new stores are being built, skylights are being installed to reduce electricity consumption during peak daylight hours when some of the store's overhead lights are being cycled off. 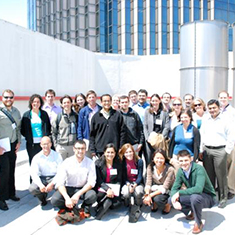 Chris Anderson, a student at Pennsylvania State University, was hired as a 2009 EDF Climate Corps fellow at Ahold/Giant.