After collecting the required energy usage data from all of BART’s assets, Toepfer determined the greenhouse gas emissions for 2013 and modified an existing BART simulation tool to produce emission targets for the years 2020 and 2035. Based on these numbers, the Sustainability Group and Toepfer identified electricity procurement, station lighting and wayside energy storage as short-term goals to advance BART’s energy efficiency and GHG reduction goals. Toepfer helped BART to understand the carbon footprint savings BART could achieve by negotiating for specified renewable electricity sources under their new electricity contracts. Furthermore, Toepfer advanced BART’s LED lighting upgrades by working on the technical implementation, and he also accelerated the procurement of central lighting control software to enhance the positive effect of LEDs on the stations. In addition, Toepfer interviewed several other transit agencies about wayside storage for electricity from regenerative breaking and worked out a strategy to implement a pilot project.

Toepfer’s modifications to the greenhouse gas accounting tool should allow BART to start tracking its energy usage and carbon emission data against the developed targets and create causality between actions taken and results measured. The proposed energy efficiency projects, once fully implemented, could save BART 19.7 million kilowatt hours of electricity and at the same time, these projects would create $8.9 million in operational cost savings, money that BART could use to enhance service and take more cars of the road. After presenting his findings to the relevant executives, Toepfer ensured all projects were far enough along for BART to continue pursuing them. Transporting more passengers with less energy could greatly enhance BART’s positive impact on the Bay Area. 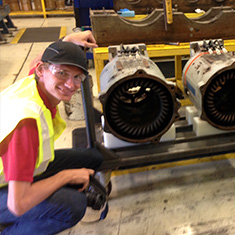 University of Illinois at Urbana-Champaign

Jannis Toepfer is an MSTM candidate at the University of Illinois at Urbana-Champaign and a student-athlete on the track team. Previously, he completed an MS and BS in Aerospace Engineering with a research focus on Vertical Axis Wind Turbines. Preserving the amazing places he has traveled to is his motivation to promote sustainability.