After analyzing operational and energy use data, it became clear that the HVAC and compressed air systems offered the greatest opportunities for operational efficiencies, given the extreme desert climate in Lancaster. Alsulaiman recommended solutions that would impact energy use associated with temperature control such as:

He also noted that lugging air leaks and reconfiguring the compressed air system to run with the most energy efficient units as lead compressors would significantly decrease the costs of compressed air.

Alsulaiman presented another opportunity which involved investigating the efficacy of the in-place lighting motion sensors, as birds and other movement sent false occupancy signals. Given the predictable working hours in the facility, lighting timers were recommended as the more effective option. In addition to these operational recommendations, he confirmed the viability of rooftop solar at the facility and developed a proposal for a two-phase solar development that would meet the full energy demand of the facility.

Alsulaiman's projects have an NPV of $3.2 million over their lifetimes. Annually, they could save 5.8 MegaWatt hours of electricity, nearly 20,000 therms of natural gas and 2,600 metric tons of carbon dioxide emissions. Plans have been made to move forward with the solar development, as well as install HVAC and lighting timers and reconfigure the air compressors. With these projects, BYD Coach and Bus should be able to reduce energy usage and expenditures substantially while still meeting increasing production levels. 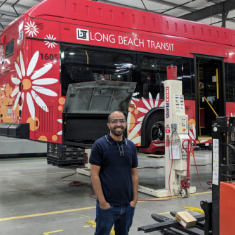 Abdullah Alsulaiman is a Master’s in Electrical Engineering/Engineering Management candidate at the University of Southern California. Since 2013, he has been an active member of the Saudi Students Association at USC, and is now the VP. He is interested in energy policy and economics, and he is passionate about sports.