Climate Corps fellow Sarah Shapiro, a University of Michigan MBA/MS student, was working alongside engineers at Cisco Systems, the worldwide leader in supplying networking equipment and network management for the Internet.

Shapiro first worked on a project to analyze installing Power Distribution Units (PDUs) on racks in data labs. The project was started in 2008 by EDF fellow Emily Reyna.

Shapiro’s first project could save Cisco an estimated $8 million per year (with an 18-month payback) and reduce the company's greenhouse gas emissions by approximately 39,000 tonnes of GHG emissions each year.

By implementing temperature increases in all of Cisco's major labs, the project team estimates that it can save approximately $1.8 million and 18 million kWh of electricity annually. 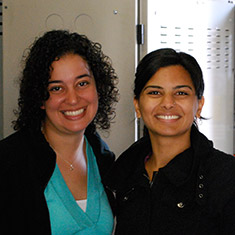 Sarah Shapiro, a student at the University of Michigan, was hired as the 2009 EDF Climate Corps fellow at Cisco.