As an Environmental Defense Fund Climate Corps fellow at the City of Bellevue, James Paul Burgess prepared the city for the upcoming two-year energy efficiency behavior change program known as Bellevue Urban Smart (BUS). The program existed for many months in concept, but it was Burgess’s task to provide the City of Bellevue with the tools necessary for the upcoming rollout, including database development and meter identification, energy efficiency research, stakeholder engagement and district characterization.

Burgess’s research provided valuable insight into how similar programs had been marketed successfully. He compiled his research into a list of recommendations including: forming a tight-knit steering committee, using easily-digestible data for decision making, creating clear tools and checklists to encourage participants and fostering champions as the primary way to encourage behavior change. Burgess also developed a quadrant system to visualize the district in a more simplified manner for market characterization, outreach and benchmarking.

At the end of BUS, the city aims to reduce the annual energy usage in the BUS district by nearly 5 percent or 16 million kilowatt hours, which equates to $1.2 million in annual utility cost savings and a reduction of approximately 9,700 metric tons of carbon dioxide equivalents. These reduction targets could be exceeded if buildings implement new capital measures beyond behavior changes targeted by BUS. The City of Bellevue is now well-positioned to begin this important step toward becoming an energy-smart city. 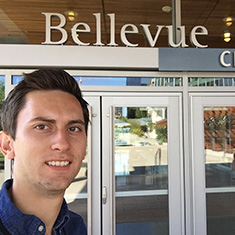 James Paul Burgess is a Master of Environmental candidate at Duke University’s Nicholas School of the Environment. He is also pursuing the Sustainable System Analysis Certification. He has previous internship experience working on sustainability and energy projects at Austin Energy and Wetrock Resources.