A private company had approached the COB wishing to rent two acres of land at one of the City's waste water treatment plants for the purpose of building and operating a biochar facility. Biochar is the process by which organic matter is placed in an oven and raised to very high temperatures in an anoxic environment. This process yields biochar, a charcoal like substance which is usable as a soil amendment. Champ evaluated the proposal, but advised the City to decline the proposal and research other options.

Champ also analyzed the Chief's Energy Challenge, which was brought to COB's attention by another EDF Climate Corps fellow. It challenges participating departments to become leaders in energy efficiency while maintaining their ability to provide uninterrupted public service. Champ created a baseline energy usage for each fire station within COB and the Bloomington Fire Department as a whole; then completed station walk-throughs and identified potential energy projects. Champ recommended that COB set energy reduction goals at 15 and 25 percent, which is even higher than the Chief's Energy Challenge’s recommended 10 and 20 percent.

Champ also worked on creating a master list of energy efficiency projects for the City.

Champ’s master list created a central clearinghouse of information about energy efficiency projects across all City departments. Such a list will allow for the prioritization of projects based on payback or potential greenhouse gas reductions.

Also, Champ found that the total savings of truck fleet conversion project, with a fleet size of ten trucks for both refuse and recycling collection, could reach $260,000 over the course of their usable lives. 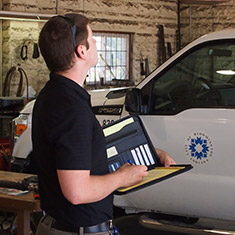 Ian Champ, a student at Indiana University, was hired as the 2013 EDF Climate Corps fellow at City of Bloomington.