In April 2015, the City of Los Angeles released its Sustainable City pLAn, an ambitious blueprint for a clean, prosperous future for Los Angeles. In accordance with the Kyoto Protocol and California state policy, the City selected 1990 as its baseline year to track greenhouse gas emissions reductions progress. However, the methodology used to derive sector-specific emissions resulted in inaccurate values, especially in the transportation sector. As such, the city sought an EDF Climate Corps fellow that could help revise the baseline by applying more accurate methodologies.

After reviewing the City’s 2013 inventory and the 1990 baseline inventory, it became clear that the solution would not be an easy fix. Activity data from 1990 was not available for many sectors, so Joseph Tanzer, the EDF fellow selected for the City of LA, determined the project would require developing metrics to back-cast emissions. The biggest challenge throughout the fellowship was determining how to scale transportation accurately. Tanzer worked with transportation modelers at Southern California Association of Governments and the transportation consultant Iteris to develop a scaling factor using volumetric traffic data calculated by the Caltrans’ Highway Performance Monitoring System to back-cast emissions generated from motor vehicles. Additionally, Tanzer was able to revise emissions from other sectors, including the built environment and off-road transportation.

The City has an ambitious goal of reducing greenhouse gas emissions to 80 percent of 1990 levels by 2050. As such, it is imperative the City can monitor and track its progress as it seeks to reduce emissions. Tanzer’s work could be used as a guide for the City’s forthcoming Climate Action Plan, and it may drive policy decisions with respect to how the City decides to pursue emissions reductions in the following decades, or, in other words, the pace at which each sector can feasibly decarbonize. 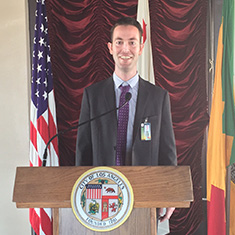 Joseph Tanzer is a dual degree MPA/MSES candidate at Indiana University's School of Public and Environmental Affairs. His area of focus is energy policy, and he is especially interested in decentralized power and its implications for the utility industry.

Other City of Los Angeles Engagements