Nozomu Nagai found energy efficiency opportunities for HCA with a focus on boilers and refrigeration.

Nozomu Nagai spent his summer as an EDF Climate Corps fellow in Nashville evaluating hospital energy efficiency projects for HCA Inc, one of the nation's largest healthcare operators. While HCA had already initiated energy efficiency projects as part of the KKR and EDF Green Portfolio partnership program, Nagai was assigned a project to evaluate the economical feasibility of installing a Variable Refrigerant Volume (VRV) heating and cooling system pilot installation at one of the HCA supply chain warehouses. Nagai was also assigned a project to investigate savings possibilities with utilizing modular boiler systems in hospitals.

After analyzing the pilot project, Nagai found that a VRV system could reduce energy annually by average more than 30 percent compared to a conventional roof top unit system at five other HCA warehouses. HCA has installed some modular boiler systems in the past but with recent advancement in modular boiler technology, Nagai analyzed applicable energy efficiency data and identified 20 possible hospitals with higher NPV. It’s estimated that a 20 percent energy reduction could be possible when the time comes to either replace a boiler or install a new boiler system.

Nagai's analysis showed that if these two initiatives were rolled out to five of HCA's warehouses and 20 hospitals out of 165, the company could possibly reduce 2.3 million kilowatt hours of electricity per year along with 81.5 million kilowatt hours of natural gas per year, saving $2.3 million in energy costs and more than 16,000 metric tons of CO2 emissions annually. Over 20 years of the lifetime, this could potentially save the company approximately $16 million in net operating costs. 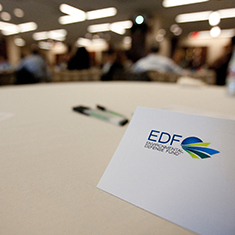 Nozomu Nagai, a student at Washington University, was hired as the 2011 EDF Climate Corps fellow at HCA Healthcare.