They modeled the energy intensity of NYCHA housing developments, enabling NYCHA to compare buildings on benchmarks such as square footage, age and number of buildings.

In response to New York City's Local Law 87, which requires all public sector buildings to undergo an energy audit by a set date, Dominique and Kujac created a modified energy audit schedule for NYCHA's most energy-intensive developments.

They wrote a strategic plan to engage NYCHA residents in energy conservation, as well as an estimate of the savings the plan will generate.

Together, Dominique and Kujac's energy efficiency projects could save the New York City Housing Authority over $25 million, as well as 143 million kilowatt hours of electricity and 45,000 metric tons of carbon dioxide annually. 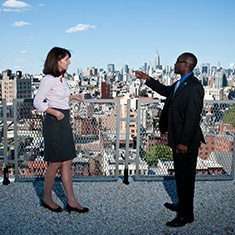