Justin Krupa recommended cost-effective scenarios that will enable the Port of Baltimore to fulfill their commitment to using new fuel cell technology.

Krupa performed an energy audit on facilities across the building portfolio of POB’s largest public marine terminal. He also interviewed facilities staff and researched current FC market technology and trends. Based on the information gathered, he outlined a systems-based approach for FC implementation, which would optimize design and overcome typically prohibitive capital costs.

Krupa selected solid oxide FC technology for its ability to use existing energy resource distribution infrastructure. He cited that small-scale power plants could be deployed to offset building energy use with reasonable payback periods at about half of system lifetime. This would also reduce local GHG emissions attributed to powering the targeted facilities by up to 75%.

There is huge potential for savings and the fuel cell deployments where feasible provides additional resiliency. Over its lifetime, a FC system installed onsite at POB could save 61 million kilowatt hours of electricity use and 30,000 metric tons of carbon dioxide emissions. If implemented, the system would serve as an example of the technology as a viable solution for powering a broad range of energy loads. This could reduce investment risk for future systems in the region. It would also facilitate grid modernization efforts regarding end-use electrification and distributed power generation, which are important components of an evolution, not revolution, to a smart power grid. 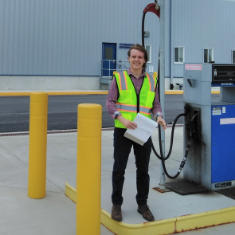 Justin Krupa is an MS in Technology candidate at Appalachian State University. He researches intelligent building systems design and enjoys working on Team Sunergy’s solar-powered car. Krupa discovered his passion for sustainability while in college where he was involved with student groups combating social issues.

Other Port of Baltimore Engagements