In 2016, the City of Columbus was named the winner of the Smart City Challenge. Through a public/private partnership with Columbus Partnership, Columbus is implementing Smart Columbus, an initiative funded by national grants designed to improve sustainability, quality of life, safety and economic development. The Columbus Partnership enlisted EDF Climate Corps fellow Imelda Foley to quantify the regional economic impact of $10 million dollars of grant funding and $707 million in aligned spending by Columbus businesses and community organizations.

Through a detailed analysis of regional spending in smart city initiatives, Foley found that $270 million would not have entered the regional economy if not for Smart Columbus and the other aligned programs. Much of the regional investment occurred in the 11-county Columbus area, resulting in $564 million total impact invested in the region. In addition to the quantitative analysis, Foley examined the state and local clean energy policy environments. Her Clean Energy and Prosperity Agenda is informing Columbus Partnership’s focus as it takes steps to become a leading advocate for state level policy that recognizes that an advanced clean energy industry contributes to an innovative, thriving economy. Her city-level policy options report is being used by the Smart Columbus policy committee to identify ways for the City of Columbus to build on the successes they have already achieved.

Foley's work shows that electric vehicle adoption, smart city technologies, and clean energy contribute to the economic development of a region as well as to healthy air and responsible climate stewardship. 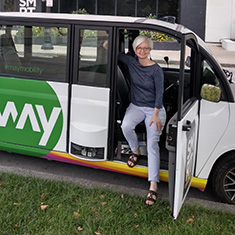 Imelda's focus is on creating regulatory pathways for newly commercial energy technologies. She is working on policy for vehicle-to-grid systems while completing her master's degree at University of Delaware. Prior to this, Imelda worked at a start-up commercializing another new technology: high-temperature industrial solar thermal.