Michael Brochstein was brought on board to help United Tribes Technical College (UTTC) face the challenge of lowering its energy costs. Located on the grounds of a decommissioned early 20th century military base, most of the college’s 100+ buildings are over 100 years old, meaning they were built long before the first energy crisis in 1973.

Working with UTTC staff, Brochstein did a physical survey of many of the buildings and interviewed key stakeholders with knowledge of facilities, finances and operations. Brochstein’s recommendations included both policy and technology changes and an aggressive re-lamping program to replace numerous incandescent and metal halide bulbs with LED or CFL replacements. Brochstein also recommended specific professional energy audits, installation of occupancy sensors and bi-level lighting, installation of electrical meters for every building, replacement of older computer monitors, televisions and T12 fluorescent lighting, the repair of weather stripping and caulking and further investigation into the use of an anaerobic digester, renewable energy, cogeneration and mandated sleep mode for PCs.

Brochstein estimated that re-lamping could pay for itself in approximately three years and save UTCC thousands of dollars per year thereafter. 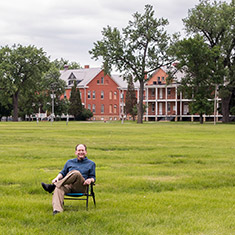 Michael Brochstein, a student at Columbia University, was hired as the 2014 EDF Climate Corps fellow at United Tribes Technical College.