Michael Millstein recommended LED lighting upgrades as well as occupancy sensors and the use of natural light to improve energy efficiency.

During an initial walk-through of RRUMC, Millstein identified opportunities to save energy through the application of efficient lighting practices. Lacking organized data on lighting, Millstein was challenged to survey the facility and build a working inventory to base his analysis upon. As such, Millstein analyzed a cross-section of spaces where occupancy was known and identified a series of promising projects: from retrofitting stairwells with LEDs and bi-level occupancy sensors to installing photovoltaic sensors to make use natural light. This analysis demonstrated that implementing occupancy controls where operating hours are variable and retrofitting higher-use, fixed-occupancy areas with LEDs (and supplemental daylight controls where feasible) would yield the greatest energy and cost savings. In addition, Millstein advocated the replacement of existing operating room boom lights with LEDs, which would give off significantly less heat and thereby promote a more comfortable treatment environment. Also he recommended shutting down air-handlers serving non-essential spaces such as the auditorium during off-hours, and although UCLA Health System has a very active recycling program, he realized the need for additional recycling and compost receptacles around the facility to increase landfill diversion.

In total, the lighting projects Millstein identified could reduce RRUMC’s electrical consumption by 1.3 million kilowatt hours, equivalent to removing 122 US homes from the grid, and present UCLA Health System with a net present value over the life of the equipment exceeding $1 million. More significant, is that as UCLA Health System gathers additional data on space usage, it will be able to update the inventory Millstein created and use the proposed projects as templates to replicate across the facility and the entire UCLA Health System. At the end of his fellowship, Millstein presented his findings to UCLA Health System Facilities Director, Val Padilla, and Energy Manager, Jon Smithers, who plan to implement several of the proposed projects within the calendar year and commit to using improved lighting as a tool to achieve energy efficiency and carbon reduction goals moving forward. 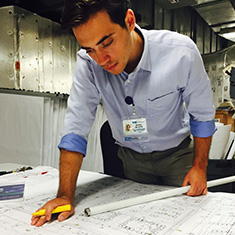 Michael Millstein is an MESM candidate at UC Santa Barbara. He is President of the Bren Net Impact Chapter and enjoys coaching water polo, which he played collegiately at UC Davis. Prior to graduate school, he road tripped across the US with his father and gained a greater appreciation of how Americans are affected by climate change.