Stephanie Griffin improved the measuring and metering of water use and uncovered several water saving opportunities.

In the summer of 2014, UT Southwestern Medical Center hosted an EDF Climate Corps fellow who identified a broad range of potential water-saving projects. The 2015 fellow, Stephanie Griffin, followed by analyzing the costs and regulatory feasibility of the identified water-saving projects. Additionally, Griffin searched for additional opportunities to enhance the water savings program. Griffin joined the Sustainable Business Solutions division. There she investigated regulations and codes to ensure the University was in compliance with existing codes and to determine what steps might be necessary to be ready for the medical center’s future expansion.

Griffin reviewed the campus's water bills and toured the campus's most water-intensive facilities, including five thermal energy plants and several hospitals and clinics. She familiarized herself with the landscaping department's work and irrigation schedule. The Sustainable Business Solutions department was retrofitting plumbing fixtures for immediate water savings (a project identified by the 2014 Climate Corps fellow), so Griffin determined that one of the most useful things she could do was to show where the greatest water-savings potential would be in new facilities (many of which are being planned over the next five years).

Additionally, Griffin brought suggestions for improved immediate and long-term water tracking. She found issues with thermal plant and landscaping submeters and subsequently presented the case to standardize cooling tower meters across campus to optimize sewer credits from the utility. Registering the cooling tower deduct meters with the utility would bring near-immediate payback: each thermal plant would receive over $100,000 in sewer credits. She identified potential savings from installing condensate recovery systems at new thermal plants' air handler units at an average of 1.28 million gallons per 1,000 cooling tons per year. Utilizing a future thermal plant's water source to municipal water, rather than a well, would result in 11 million gallons of cooling tower makeup water saved per year. The savings would need to outweigh the water purchase costs. A final long-term suggestion was in establishing a rainwater harvesting system for vehicle washing. Although the paybacks with rainwater systems are longer, it could be implemented in phases, funded by immediate savings from sewer credits.

Griffin’s work focused on both immediate financial savings and long-term water-saving measures that would reduce consumption by millions of gallons each year and improve the campus’s water tracking capabilities. She set up a WaterMAPP for her supervisor to track water in the thermal plants and worked with the Energy Management System employees to put the thermal plant water meters on the EMS for remote readings and tracking. She also provided suggestions for more water-efficient equipment across the campus, including landscaping meters and medical devices, which had payback periods of less than four years. As UT Southwestern continues to grow and undergo major renovations, the EDF Climate Corps fellows' work will help the campus become more water efficient and better able to track consumption. 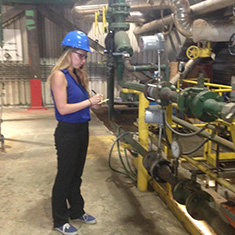 Stephanie Griffin is a Master of Environmental Science and Management student at the University of California, Santa Barbara, where she is specializing in Water Resources Management. Prior to graduate school, Griffin served as an Agroforestry Volunteer with the US Peace Corps, where she found a passion for natural resource management.