Eric Norell identified how Vassar College might implement a carbon tax and laid the groundwork for implementation for the College Committee on Sustainability.

Norell identified six major components of an internal carbon charge structure and co-authored a white paper with Vassar professors and students outlining each strategy's projected impact and implementation feasibility at small liberal arts colleges. Norell then engaged Vassar's senior administrators, advocating for a high-level internal carbon charge that could be phased in over several years and used in conjunction with an expanded Green Revolving Fund. The Vassar President has responded by asking Vassar's College Committee on Sustainability to incorporate a carbon tax in a new Sustainability Master Plan, which will set targets for achieving carbon neutrality. To assist the Sustainability Committee in this effort, Norell also developed a financial model that shows the energy savings and GHG reductions associated with dozens of potential projects. The model thus provides an integrated snapshot of the long-term effects associated with each potential combination of carbon charge structure and efficiency project portfolio.

The documents and tools Norell has delivered highlight both recommended and alternative paths to carbon neutrality, with an emphasis on the financial implications. These materials demonstrate that significant strides can be taken in the short term that will reduce Vassar's carbon footprint, while simultaneously providing an educational opportunity for the Vassar community and an example that can be studied and followed by peer institutions. By adopting an internal carbon charge system, Vassar can also ensure that proper economic incentives are in place for future students and administrators to take advantage of technology changes, energy price fluctuations and other opportunities to achieve zero net emissions within the next 10 to 20 years. 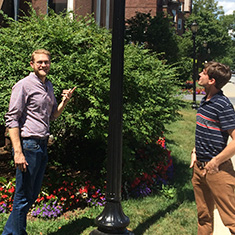 Erik Norell is a dual-degree MBA/MEM candidate at Yale University. He is an active member of the Global Social Enterprise, Conservation Investing and Net Impact student organizations. Prior to Yale, Norell worked as an economics analyst for the Department of Defense. He holds an M.A. in Islamic Studies from Duke University.