Yueyun Fu helped guide Walmart Retail (China) in the process of creating a pilot project that would engage suppliers and increase participation in their FEE program.

Walmart Retail, a China based sourcing and selling retailer is working in conjunction with Walmart Global Sourcing (China) to reach the goal of Walmart’s Project Gigaton, which is to reduce greenhouse gas (GHG) emissions in the company’s supply chain by one gigaton (1 billion metric tons) by 2030. In order to do this, the company started the Factory Energy Efficiency (FEE) project to reduce its Scope 3 CO2e emission. To increase the impact of this program, they enlisted EDF Climate Corps fellow Yueyun Fu to help improve supplier engagement methods and increase participation.

In the first year of the project 100 suppliers were invited to join the FEE program. The selection was based on the companies’ trade amounts with Walmart China. Out of the 100 chosen, only 50 immediately accepted the invitation to participate. The rest suppliers either don’t know whether they can reduce energy consumption or just refuse the invitation. Fu interviewed those suppliers to investigate their reason for refusal and highlighted the ones with the greatest energy saving potential. Once she understood the collective reasons for lack of participation, Fu suggested a pilot project to promote energy saving among suppliers. This program would provide free onsite audits and offline consulting services to 5 suppliers. She also made recommendations that would guide the process of selecting the best candidates for invitation to the project.

As a result of Fu’s recommendations, 9 suppliers are currently in a pool of candidates being evaluated for participation in the pilot project. Those suppliers are estimated to emit 162,370 ton CO2e per year in total which shows the great potential of the program. If implemented, 2 of the proposed projects have the potential to reduce 380 ton of CO2 emissions and 430,000 kWh, and have a NPV of $176,000. 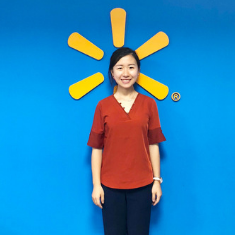 Yueyun Fu is a Master’s candidate in Environmental Science and Engineering at Tsinghua University. She has analyzed continuous atmospheric observation data and she previously interned at the Green Bond Evaluation Department, where she gained data analysis skills, exceptional interpersonal skills and energy savings management knowledge.