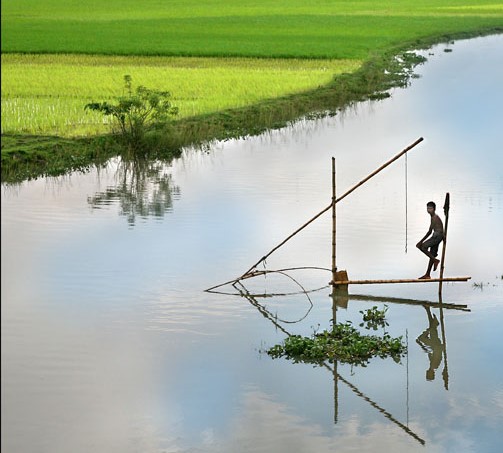 Climate change is certainly in the news this week. The release of the White House’s Clean Power Plan is making headlines all over the country and beyond, sparking conversations about how this plan will affect all levels of government, utilities, companies and taxpayers.

But climate change is much, much more than a policy issue, as this week’s episode of Years of Living Dangerously shows us. The episode focuses on the health impacts of climate change and, boy, does it hit home. And, not just our home, but homes all around the world. We follow three correspondents to three different parts of the world – Michael C. Hall to Bangladesh, Matt Damon to Los Angeles and Thomas Friedman to Yemen – where climate change is taking a very personal toll on the health of these communities.

“Is it possible the most dangerous thing about global warming is the most obvious, the heat itself?” wonders Matt Damon. In Los Angeles, it seems the answer is yes. The frequency and intensity of heat waves in cities like Los Angeles is increasing and the health implications are dire. Heat can cause early labor in pregnant women, leading to premature birth. Also, heat is the leading cause of death for high school athletes; for high school football players, in particular, heat deaths have tripled in recent years. Damon visits the heartbroken family of one of these victims, Forest Jones, a high school football player whose life was taken by heat. The scary part is not only that heat deaths are often undocumented, but also the sheer number of heat-related deaths. Dr. Rupa Basu estimated there were 170 excess deaths during just one heat wave last year, just in Los Angeles, and this wasn’t even the most severe heat wave.

In Yemen, people are dying in conflicts over access to water. Yemen’s water supply, an underground reservoir, is finite. The president of Yemen tells Thomas Friedman that the country may actually run out of water. Friedman visits two communities that have been fighting over access to water for over a decade and speaks with a man whose son was shot and killed in one of these fights. Sadly, this is not an isolated incident – 60% of rural conflicts in Yemen are over water.

While Yemen is running out of water, Bangladesh is experiencing extreme flooding. Predictions estimate that by 2100 a 3-foot rise in sea level will inundate 17 percent of Bangladesh’s land mass and force 20 million people off their land. The increasing severity and frequency of cyclones is also devastating. The combination of two cyclones in 2007 and 2009 killed thousands and left millions homeless. In short, Bangladesh is geographically cursed. And, as a result, residents from the southern part of the country are becoming climate refugees and migrating to the megacity of Dakha.

It really pulls at the heartstrings when Michael C. Hall interviews one of these climate migrants. Shahidul Islam migrated to Dakha from southern Bangladesh because the changing climate has limited the availability of jobs and took a job as a garment factory worker, as many climate migrants do. He was working at Rana Plaza when it collapsed in April 2013, killing more than 1000 workers. Islam is now in a rehabilitation clinic recovering from injuries from the accident and learning how to use a computer so he can find work.

Michael C. Hall buys a $60 plane ticket for Islam to travel to his hometown, a journey that would take 10 hours by bus. It’s his first time on an airplane, and his smile is truly priceless. It reminds us that while responding to climate change will require large-scale action like the Clean Power Plan, the impacts of climate change are very, very personal.

Kate leads the planning and execution of EDF Climate Corps network and training activities, including the Fellow Training, the Annual Network Event and regional events. In addition, Kate manages summer engagements and contributes to fellow recruiting and host relationship management.