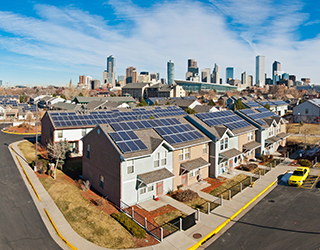 To many, it may seem that pursuing environmental sustainability would fall relatively low on a municipal housing authority’s goals. After all, providing moderate and low-income families with clean, stable homes in the face of uncertain federal subsidies and increasing taxpayer scrutiny is challenge enough.

The Housing Authority of the City and County of Denver (DHA), therefore, deserves praise for its innovative solar power program that not only provides renewable energy, but creates revenue for the housing authority, creates green jobs in the region and saves taxpayers’ money – all the while reflecting the spirit of the federal Department of Energy’s Better Buildings Challenge, which looks to reduce energy consumption by 20 percent by the year 2020.

DHA serves as a model for municipalities across the country. 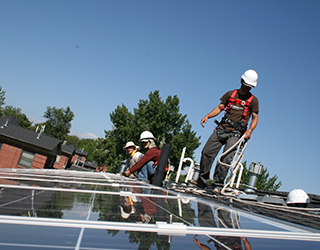 Andrea Davis of the DHA’s Real Estate Department and Chris Jedd, portfolio energy manager, showed the creativity and sheer will to make a lofty renewable energy goal affordable, manageable and successful, while providing their communities with empowerment, economic opportunity and a vibrant living environment.

After careful vetting through its RFP process, the DHA partnered with several solar energy companies to ensure that taxpayers funded virtually no up-front costs. In 2012, the authority teamed with Denver-based Oak Leaf Energy Partners to scope, develop and seek financing for the project which included the installation of 666 solar electric systems on 387 DHA resident housing rooftops, with the production potential for 2.5 megawatts of electricity. Namaste Solar of Boulder, CO installed more than 10,000 solar panels over the course of 11 months. And, Belgium-based Enfinity provided $10 million in financing and operation of the systems, agreeing to not only sell the electricity it generates from the solar electric systems to DHA at a discount, but to pay DHA for leasing the authority’s roof space.

Throughout the project, DHA wrote its own rules. Without vast internal experience and expertise in running its own solar power business – and without the upfront capital -- the authority looked outside for the right combination of partners that could help the authority realize the goal of an anticipated 3.4 million kilowatt hours of electricity per year, which is an annual reduction of around 3,400 tons of carbon dioxide in the region.

For DHA, there are a number of resulting benefits. This project enabled the housing authority to expand its portfolio of renewable energy sources without dedicating funding. And, with the additional revenue streams from its roof leases, DHA has capital that can be used for other much-needed improvements.

In addition the DHA’s solar energy costs are now also long-term and predictable, which is something the federal department of Housing and Urban Development (HUD) encourages. And, with accompanying resident communications programs, DHA has provided its residents with information about the project and an additional reason for them to take pride in their homes.

Through its EDF Climate Corps program, Environmental Defense Fund has proudly worked with DHA on its sustainability programs, and we’ve seen first-hand how DHA’s proactive engagement on the frontlines of its Solar PPA changed the way it viewed its energy consumption and carbon footprint.

There are 3,300 housing authorities in the United States. If all followed DHA’s lead, the rooftops of public housing authorities could produce 11 billion kilowatt hours of electricity annually, powering more than one million homes, and reducing carbon dioxide emissions by 11 million tons. And saving municipal taxpayers millions of dollars annually in energy costs.

It’s time for those other 3,299 other municipalities to follow DHA’s lead.