Jen Snook worked closely with the Director of Energy at AT&T to evaluate the lighting use in roughly half of AT&T's real estate portfolio.

Jen Snook spent the summer of 2010 as a Climate Corps fellow at AT&T, a leading U.S. communications company. An MBA/MEM student at Duke University, Snook worked closely with the Director of Energy at AT&T to evaluate the lighting use in roughly half of AT&T's real estate portfolio. Besides counting light bulbs, the challenge was to quantify just how often the lights were left on unnecessarily.

Video: AT&T discusses the implementation of this lighting project.

In the local Chicago area, Snook conducted a pilot of light loggers that record lighting use and occupancy patterns of a given space. The study indicated that on average the lights were on roughly half of the time, while the spaces were occupied less than ten percent of time.

Snook recommended occupancy sensors for lighting in AT&T's central offices across the country. She estimated that installing these lighting sensors could represent an 80% savings in lighting system energy use. Applying this to more than 100 million square feet of space could save hundreds of millions of kilowatt hours annually.

Snook's pilot project in Chicago provided AT&T with the hard data it needed to make the case for installing occupancy sensors. AT&T is going to be rolling out this project and will install occupancy sensors in its 250 largest central offices over the next two years. 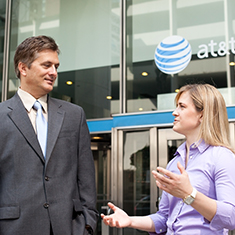 Jen Snook, a student at Duke University, was hired as the 2010 EDF Climate Corps fellow at AT&T.