Schatmeyer began her work by updating the agency’s greenhouse gas accounting model to arrive at a new and more accurate 2013 baseline. This baseline was used, along with future planning data, to model assumptions for future efficiency scenarios. This helped highlight which specific decisions would have the greatest impact on future emissions.

After analyzing energy use data from facilities across BART’s portfolio, Schatmeyer noted that the main component affecting BART’s GHG output was the emissions factor for the electricity it procured. She recommended that BART should make it a priority to make future decisions to procure from greener sources, such as wind or solar. The recently passed Senate Bill 502 will allow BART to purchase wholesale electricity directly from renewable energy sources. This provides BART a remarkable opportunity to purchase nearly 100 percent renewable and sustainable energy in the future.

Although the majority of BART’s total GHG emissions were due to train traction power, Schatmeyer found that the most actionable savings could come from decreasing the emissions from BART’s 44 stations. Existing lighting in these facilities is over 30 years old with no control system in operation. Simply having a schedule for turning off unnecessary lighting when the stations are not in service overnight would provide a tremendous amount of energy savings with little effort, and would allow for the option of demand response participation in the future.

Schatmeyer evaluated financing options for an agency-wide lighting upgrade to LEDs, and urged BART to overcome the challenge of coordination with representative departments, stakeholders and decision makers to get the project requirements completed. She recommended that the capital-constrained agency make use of manufacturer financing, which would use energy savings to pay for the project. In that way, long term benefits could be considered instead of just upfront costs.

If BART completed a station-wide lighting upgrade, its non-traction power energy usage would be projected to decrease approximately 70 percent based on 25 percent savings for above-ground stations and 35 percent savings for below-ground stations. That would mean an annual savings of over $1.8 million, based on an electricity price of 11 cents per kilowatt hour, and a savings of over 800 metric tons of carbon dioxide. To put that into perspective, those savings could power over 12 million homes for one hour.

At the end of her fellowship, Schatmeyer presented her findings to the BART General Manager's Quarterly Meeting and to the Planning and Development Team. The agency now has updated greenhouse gas emissions data for 2013 that they can use as a starting point for upcoming strategies and target setting. The actions she prioritized for the agency in the Sustainability Action Plan chapter she wrote will likely become the first items of implementation for BART’s new Sustainability Team. With this project, Schatmeyer has provided BART with actionable energy strategies to make transportation in the San Francisco Bay Area more efficient. 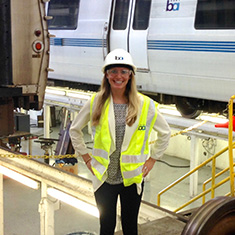 Katelyn Schatmeyer is currently pursuing an M.S. in Global Affairs with a concentration in Energy and Environment Policy from New York University. Her graduate thesis focuses on efficiency and demand management within the electric utility sector. She previously worked at a renewable energy start-up and as a media consultant abroad.