Michael Didyk worked with Caesars Entertainment to assess the feasibility of solar PV, CNG vehicle conversion and the installation of an anaerobic digester.

Caesars’ strategy on energy has been to focus on demand-side efficiencies such as LED lighting retrofits which provide the most favorable financial and environmental benefits. The company has demonstrated great success by reducing its energy use intensity by 20 percent from 2007-2013. Focusing on conservation and efficiency will position renewables, such as solar PV, to make the greatest impacts as it becomes more feasible.

Recent solar project activity in Las Vegas indicated that perhaps the economics had become more favorable, so Didyk was asked to revisit the feasibility of placing a solar array on the roof of the Caesars Palace Convention Center, which was initially investigated five years ago. Didyk wrote the request for proposal (RFP) for a 1-megawatt (MW) array, structured as a 25-year power purchase agreement (PPA). He led the on-site roof walks, collected the pertinent data for the bidders and provided answers to clarifying questions. While in the middle of the RFP process, NV Energy, the state’s largest electric utility, received approval from its regulating body to expand their existing renewable energy incentive program to include commercial customers. Didyk then analyzed the bids to quantify financial paybacks of the PPA rates against expected cost of electricity in a business as usual scenario during the term of the PPA.

Upfront CNG conversion costs range from about $12,000-15,000 for small cars, to $17,000-$25,000 for limos and buses. Large semi and box trucks range widely from about $15,000-$50,000. Paybacks are accrued mainly with miles driven, since CNG fuel prices are about $1.50-$1.90 per gallon cheaper on an energy equivalency basis, measured in gasoline gallon equivalent. Didyk created a modeling tool that accepts 15 variables as inputs to automatically generate expected financial paybacks and environmental offsets.

With the high volume of guests and vast dining and entertainment offerings, Las Vegas resorts produce a significant amount of food waste. A typical resort will produce on the order of several tons per day. Over the last several years, in an effort to divert this waste from landfills, the company has either sent the food scraps to a composting facility or to nearby pig farms for animal feed.

The company is constantly looking for new and innovative ways to maintain its leadership in environmental stewardship. As such, Didyk was asked to look at anaerobic digestion (AD) as a possible alternative solution. The process of AD breaks organic waste down in an enclosed vessel into three basic components: solid effluent, liquid effluent and biogas. Solid effluent is comparable to topsoil. The liquid effluent is nitrogen enriched and with some basic treatment can be converted into fertilizer. Depending on the feedstock, the biogas contains roughly the same composition of gases as natural gas that is mined from the ground and can be used to create electricity and heat.

The CNG conversion tool Didyk developed is now being used company-wide to easily assess if new vehicle purchases should be converted to CNG. The capital intensive option of an anaerobic digester is currently being assessed for feasibility. 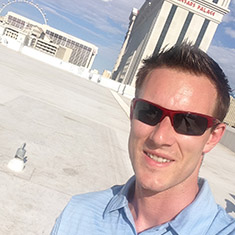 Michael Didyk, a student at Columbia University, was hired as the 2014 EDF Climate Corps fellow at Caesars Entertainment.