District of Columbia Department of the Environment

Liz Halford analyzed the scope of potential savings from applying “cool” roof coatings on affordable housing buildings in the District of Columbia.

The District of Columbia’s vision for sustainability is to become “the healthiest, greenest and most livable city in the United States” in just one generation (20 years). Within the District’s government, the Department of Energy and Environment (DOEE) enlisted Liz Halford to take a three-part program through the next crucial step in its development. Based on examples from other cities, DOEE was creating an initiative to apply “cool” roof coatings on affordable housing as part of a job training program. After an initial interagency meeting, interest was high, but questions remained. No city had ever focused cool roof programs on affordable housing. What was the real potential for energy savings? What were the costs and potential sources for funding? What should the program look like and which agency should take the lead?

To analyze the scope of potential energy savings, Halford investigated every affordable housing property in the District via satellite imagery and found that 153 properties had gray or black low-sloped roofs. These roofs could be coated relatively easily to reflect solar energy, making them great candidates both energy savings and job training. To quantify the potential for energy savings, Halford used a Cool Roof Calculator from the Department of Energy and measurements from the satellite imagery to estimate the total energy savings for each property. She also used this data and interviews from industry and government cool roof professionals to determine the costs and tasks associated with cool roof projects. Additionally, she was able to get a tour of both a cool roof and a dark roof on two schools in the District by the program director and other stakeholders of a “smart” roof program to strategically install cool, green and solar roofs on DC public buildings. To gather information on what the program might look like and options for which agency should take the lead, she met with District stakeholders and gave informational briefings to solicit ideas, interviewed a sustainability officer for an affordable housing non-profit organization and researched the data from a conference DOEE had held on best practices and lessons learned from other cities.

The potential impact of the cool roof initiative on affordable housing is significant. The District of Columbia could save over 1.3 million kilowatt hours per year and almost 1,000 metric tons of carbon oxide equivalent by coating black or gray roofs on 153 affordable housing properties as part of job training strategy for the District. Halford scoped out two possible program structures, and after internal meetings at DOEE, was able to present findings and options in an interagency meeting. Coupled with the momentum that had already been building, the discussion of energy savings, costs and potential program structure, the Director of DOEE and his counterpart at the Department of Employment Services outlined the next steps each agency could take to create a program. Because this project provided relevant analysis and realistic options, the District is positioned to meet its goal with a cool roof initiative with many benefits. 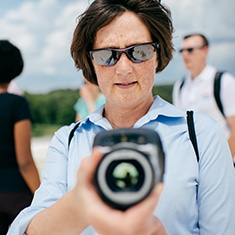 Liz Halford is earning an MBA and a Certificate in Sustainable Landscapes at George Washington University. She is a LEED Green Associate, certificated thermographer and a "Weed Warrior" for the National Park Service. She travels to Germany for "green" inspiration. Her goal is a new career in sustainable construction and landscape design.

Other District of Columbia Department of the Environment Engagements