IKEA has set an ambitious goal to phase out coal use throughout its supply chain as a way to reduce emissions and ensure long-term cooperation with suppliers. The multinational corporation enlisted EDF Climate Corps fellow Tian Qiao to track coal usage and find alternative energy sources for IKEA’s China-based suppliers. He was tasked with collecting examples of sites that have already begun phasing out coal, as well as performing a before and after calculation of the costs of proposed solutions for suppliers having yet to begin the process.

After collecting and analyzing energy use data from all IKEA suppliers using coal as a direct energy source, Tian, alongside another EDF Climate Corps fellow, identified 60 suppliers using coal in 2015. He presented this group with a plan on how to best move away from this reliance, by suggesting three alternative energy sources: natural gas, biomass and direct purchase of municipal steam. Waste steam, captured after running the electricity turbines and purchased from municipal power plants, was proved to be the most economical and environmental-friendly alternative source.

Although biomass is less expensive than natural gas, some factories must choose natural gas because their manufacturing production processes require it. For suppliers with no access to natural gas, he recommended switching to biomass. To streamline the process, Tian linked suppliers with a biomass contract company that invests the fixed costs, takes the responsibility to operate the boiler, deals with regulations and only then sells the steam to the factories. To achieve more energy savings, he recommended factories implement simple energy efficiency projects, such as LED lights installments and reusing waste heat.

Conversations with IKEA business developers and supplier representatives revealed that 52 suppliers have already phased out coal or have plans to do so. Each supplier was presented with an alternative energy source based on which makes the most economical and environmental sense, given that government requirements are satisfied. Environmental benefits are huge: overall CO2 reduction is at least 50% on average, with more than 80% reduction in NOx, SO2 and PM. IKEA expects its suppliers to phase out coal in the near future and implement a greater number of energy efficiency projects. 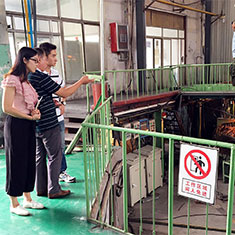 Tian Qiao is a 1st year Master of Environmental Management student concentrating on energy and environment at Duke University. He received his undergraduate degree in Environmental Studies and Mathematical Economics, with a minor in East Asian Studies. After graduation, Tian hopes to work for the energy industry in different countries.