Meredith Rowland not only suggested energy efficiency measures for Lane College, but had some implemented by the time she left.

Meredith Rowland was brought in to identify, analyze and implement several lighting projects at Lane College.

The first was a metal-halide to fluorescent lighting retrofit in the school’s J.F. Lane Health and Physical Education Building. Occupancy sensors were also installed as a part of the project, which was completed in July 2012 - during Rowland's fellowship. Rowland also recommended replacing fluorescent T12 fixtures with more-efficient, occupancy-sensor-outfitted T8s in the cafeteria, the academic student center and the remainder of the gym. Occupancy sensors, she said, should also be installed in all of the classrooms and labs in Millennium Hall. Lastly, Rowland conducted a campus-wide energy audit of Lane’s vending machines and exit signs, with the intent of installing vending misers in them, and she proposed installing computer management software that would shut down campus computer labs when not in use.

These lighting projects could save Lane College $56,000 in net operating costs, as well as 400 metric tons of carbon dioxide emissions. 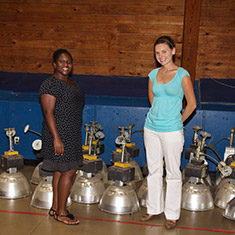 Meredith Rowland, a student at Indiana University, was hired as the 2012 EDF Climate Corps fellow at Lane College.