David Fox and Sahil Thaker spent their summers as EDF Climate Corps fellows at North Carolina Central University (NCCU), a historically black college and university in Durham, North Carolina. NCCU was chartered in 1909 as a private institution and became state-owned in 1923. Fox and Thaker sought out a multitude of ways to reduce energy costs at NCCU because it not only faces a state mandate to reduce energy consumption by 20% by the year 2012, but also rising rates for electricity prices. The university has already taken steps to reduce its carbon footprint by purchasing electric cars for campus use, and setting its own goals to limit greenhouse gas emissions.

Fox and Thaker worked closely with the NCCU Facilities Management Department to analyze the university’s lighting, natural gas usage, HVAC, as well as give LEED recommendations for new construction sites. The fellows’ HVAC recommendation was a no-cost, immediately implementable energy saving measure that could reduce energy costs by about 48% just by raising thermostats and shutting down the chiller in periods of known non-use.

In total, if all of Fox’s and Thaker’s recommendations are implemented, the university could save over $2.6 million in energy costs annually, about 50 million kWh per year and over 27,600 tons of CO2 emissions. 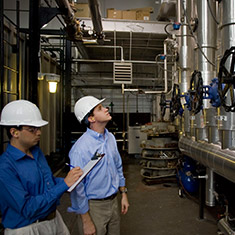