Ashwin Shankar performed a statistical analysis of the effectiveness of time-of-use pricing for Pecan Street.

Pecan Street enlisted the help of EDF Climate Corps fellow Ashwin Shankar to evaluate the effectiveness of two time-of-use pricing studies. The first study on critical peak pricing was implemented to reduce consumption in peak-load periods during the summer. During hot summer afternoons, people typically increase their use of electricity for air conditioning, and this can often over-tax existing power infrastructure. The second study on wind pricing was implemented to reduce prices of energy during particular months.

Shankar implemented a “difference-in-difference” analysis for the critical peak pricing study to determine if charging increased prices for energy at peak times would reduce use. He then conducted “t-tests” to measure the significance of the wind pricing trials.

Shankar’s analysis shows that the effect of time-of-use pricing in these two studies is statistically significant, or in other words, that notifying customers and charging them higher prices for electricity at peak times encourages them to reduce their energy use. Following the success of trials in the Austin area, these programs could now be utilized in other parts of the country to help reduce energy consumption. While it is hard to estimate exactly what total reduction in energy is due to the time-of-use pricing, enough evidence is present to justify wide implementation of such programs. 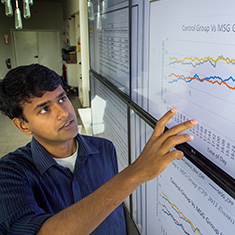 Ashwin Shankar is a Master of Engineering Management candidate at Duke University. Prior to graduate school, he worked in data analysis and modeling for a digital marketing agency. Growing up in Bangalore, India, he witnessed the effects of global warming and now hopes to put his analytics strengths to work in the sustainability field.