Paul Molta evaluated the feasibility of implementing air emissions reduction technologies for ocean-going vessels at the Port of Baltimore.

The Maryland Department of Transportation Port Administration (MPA), the state agency in charge of operating public terminals at the Port of Baltimore (POB), is investigating opportunities to reduce air emissions from ocean-going vessels (OGV) while at berth. EDF Climate Corps fellow Paul Molta evaluated the feasibility of two potential emission control technologies for OGVs: shore power--where the on-board auxiliary engines are turned-off while the ship is at berth and vessel services are provided through a connection to the local electricity grid and an exhaust scrubber system that captures emissions from the auxiliary engine stack.

Paul evaluated the feasibility of each technology based on several considerations: emission reductions, capital and operating costs to both the MPA and vessel operators, suitability of existing berth infrastructure, and compatibility with vessels currently calling at MPA berths. Current regulations of maritime emissions are primarily focused on sulfur content in fuel oil during engine operation, sulfur oxides (SOX) emissions, and nitrogen oxides (NOX) emissions. However, MPA also wanted to quantify particulate matter (PM) and carbon dioxide (CO2) emission reductions, if applicable. Direct and indirect emissions associated with each technology were identified and estimated to compare net emission impacts. After conversations with staff and vessel operators, Paul, along with mentors at Anchor QEA, LLC and the MPA’s Safety, Environment & Risk Management Department, identified a set of berths with the most potential for implementation of the technologies to develop site-specific costs and operational constraints.

Both technologies require a number of costs and operational considerations for implementation and would carry a price premium over current operations. As such, interviews were conducted to gauge vessel operators’ interest, in which a number of barriers surfaced. Vessel operators are committed to reducing emissions and are working on air quality strategies but due to the complexity and diversity of vessel operation were not sure that these two technologies are the most feasible at this time. Although the data did not support implementation of either of these technologies, Paul did suggest some drivers and options for further evaluation of the use of either technology.

At a single berth, shore power has the potential to reduce up to 485 tons of emissions annually and a barge-based exhaust scrubber system could reduce 40.6 tons of non-CO2 emissions. Paul’s findings will serve as the foundation for subsequent design studies and future considerations of these technologies. 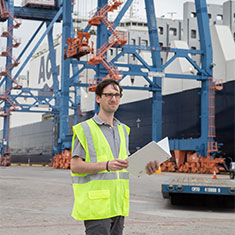 Paul Molta is a MEM candidate at the Yale School of Forestry & Environmental Studies. Paul is a research assistant at the Center for Business and the Environment at Yale, working to quantify the feasibility of renewable thermal technology in Connecticut. Prior to graduate school, he tested wind turbines in Colorado and developed a system

Other Port of Baltimore Engagements