Green Jobs: Bridging the Gap between Knowledge and Action 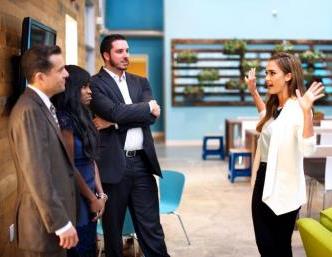 As EDF Climate Corps fellow Jenise Young points out in Years of Living Dangerously, there is a difference between being informed about climate change and actually doing something about it. Knowledge, unfortunately, doesn’t necessarily lead to action. As individuals, we all know that recycling makes sense and is important, but carrying around a soda can looking for a recycling bin might just be a barrier too big to overcome in any particular moment. Similarly, businesses know that efficiencies are the key to building their bottom line, but making them happen is another story.

On Monday night, EDF Climate Corps starred on Years of Living Dangerously, Showtime’s climate change documentary. The goal of EDF Climate Corps is to tap the talents of the country’s smartest graduate students and put them to work engaging companies and other organizations in the fight against climate change. Their work involves proving that the environment and the bottom line are not at odds and that sustainability opportunities abound even in the most unlikely of places. At EDF, we’re proud to watch these bright students go into organizations and bridge the gap between ideas and action.

We watched as the stories of three EDF Climate Corps fellows unfolded. Brendan Edgerton found ways for Office Depot, a leader among green organizations, to pursue carbon neutrality at its distribution centers saving over 32 million kilowatt hours of electricity. Scott Miller identified innovative solutions to save both water and energy by adjusting pool fountains at Caesars Entertainment. Lastly, Jenise Young focused on stakeholder engagement at Texas Southern University, aiming to get students and community members not only thinking about climate change, but also acting on it.

Looking at all of the stories as a group, this week’s episode was all about changing perceptions. We learned that Las Vegas, a city of extravagance, might actually be a place where energy efficiency can thrive. We saw that energy saving opportunities exist even in the most sustainable organizations. We also saw how climate change is disproportionately affecting underprivileged populations. Another perception I’d like to change here is the belief that sustainability is a part of somebody else’s job. Green jobs aren’t just for people manufacturing solar panels or maintaining wind turbines. Green jobs aren’t just for crunchy-granola hippies. Green jobs aren’t just for young Millennials. Being green is, or should be, a part of everyone’s job.

Our EDF Climate Corps fellows come from a variety of backgrounds. Some are business professionals like Scott Miller who seek to do well by doing good. Others are dedicated environmentalists that see the opportunity for quick and large-scale wins possible in the corporate sector. Our fellows also work with an untold variety of people within their host organizations – from energy managers to the average Joe. What defines a green job is really bridging this gap between environmental values and action. If there’s one thing you take from this episode and learn from our passionate and optimistic fellows, it’s that you don’t need an MBA or to be a climate scientist to do something about climate change. Scott Miller said, “We can change the world, but so can anyone.” At EDF, we know this is true, so if watching Years of Living Dangerously has increased your knowledge about climate change, take the important leap and see what actions you can take to help solve the biggest challenge of our time.