Demand Response 101: How it works and the incentives

Demand response. It’s been called the “killer application for the smart grid” by John Wellinghoff, former Chairman of the Federal Energy Regulatory Commission (FERC). But what is it? In short, demand response is the ability of energy users to change their demand for power during periods of severe supply constraints and/or extreme spot market prices for electricity. Every time you flip on a light switch, power must be available for that light. Though individual behavior can be erratic, aggregate energy use tends to follow predictable patterns, largely determined by the weather and time of day. These patterns are known as load profiles, and they are forecasted in advance so that the power supply always meets demand. When demand outstrips supply, rolling blackouts may occur. Because electricity cannot currently be stored cost-effectively and at scale, supply must not exceed demand, either.

There are three major trends that will drive adoption of DR: increased demand for electric services, increasing electricity costs and stricter regulations on generation facilities. While our appliances and devices are becoming increasingly efficient, they are also becoming more numerous and persistently used, resulting in growing demand for electricity. Combined with more stringent environmental standards on new power plants and a number of other factors, prices for electricity are projected upward for the foreseeable future.

Why Operating at Peak Loads is Difficult 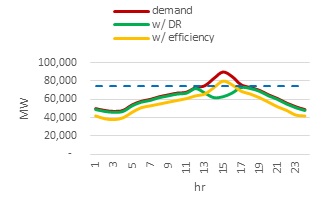 In Chicago, PJM Interconnection is the Regional Transmission Organization (RTO), which is the entity responsible for operating the electric grid. The graphic to the right depicts a hypothetical load profile for the PJM service area on a hot summer day.

The red line shows the business-as-usual case, where demand peaks in the mid-afternoon as people turn on their air conditioning units. The dashed, blue line shows base load generation capacity, which is the maximum amount of power that can be provided by the plants that operate around the clock. When demand exceeds this threshold, other, fast-response resources (commonly known as “peaker plants”) must be brought online. The capital cost of constructing these peaker plants is similar to that for base load plants, but because they only operate sporadically, they generate a fraction of the revenue. Besides not being cost-effective, peaker plants, which often tend to be coal, are among the dirtiest generation facilities. Taken together, it comes as no surprise that utilities would want to shave peak loads and avoid building and operating peaker plants.

Incentives for Participating in Demand Response

Looking again at the graph,the green line shows what the system load profile might look like with a broad portfolio of buildings participating in demand response and reducing their usage in response to signals from PJM, the utility or their demand response provider. So what is the incentive for a building to respond to such a signal? There are three major forms of demand response, each with its own type of incentive.