Karan Gupta helped JLL move towards its aggressive energy conservation goals for 2018 with a number of efficiency suggestions.

Karan Gupta worked for JLL during his EDF Climate Corps fellowship. Gupta collaborated with building management, engineers and other third-parties to identify opportunities for energy reduction by approximately 7 percent at 77 West Wacker Drive in Chicago. 77 West Wacker is part of the Retrofit Chicago Commercial Buildings Initiative, a voluntary effort to reduce energy use in commercial buildings over 200,000 square feet by 20 percent from a 2013 baseline by the year 2018. Having already achieved a 32 percent reduction between 2007 and 2013, 77 West Wacker required outside-the-box thinking to cost-effectively approach its ambitious target of an additional 26.5 percent reduction by 2018.

Measures slated for implementation include the addition of occupancy sensors and an upgrade to LED lights in stairwells, a tenant engagement pilot project making use of a novel tenant sub-metering hardware/software solution and the integration of monitor-based commissioning software with the existing building automation system. Other measures that were evaluated include an LED retrofit for exterior lighting, chiller replacement (possibly in combination with ice storage for load shifting), envelope air sealing, elevator upgrades and/or replacement and automated demand response with the potential for frequency regulation.

Together, these measures are projected to save 1,160 metric tons of carbon emissions per year, with the combined investments paying for themselves within four to five years. 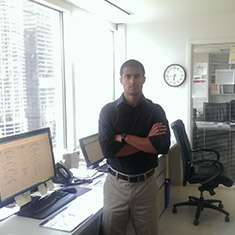 Karan Gupta, a student at Duke University, was hired as the 2014 EDF Climate Corps fellow at Jones Lang LaSalle.