NYC Department of Citywide Administrative Services (DCAS) Division of Energy Management (DEM) had been reducing energy use within its portfolio of public buildings as part of New York City’s plan to reduce GHG emissions 30% by 2017. The agency was interest in Con Edison’s monetary incentive to reduce energy load in Brooklyn and Queens by replacing old window ACs with more efficient ones, but had yet to determine the value proposition. EDF Climate Corps fellow Syed Salman Tariq was enlisted to document the ACs and evaluate the economics of upgrading window ACs in a subset of public buildings.

Salman sifted through a list of 4,000 public buildings in the DCAS portfolio and analyzed their energy use data. He identified those with a significant difference in base and peak loads, and shortlisted agencies and facilities that had widespread energy use within the electrical network where Con Edison hoped to reduce its electrical load.

Salman created a template to capture all relevant information such as AC model, wattage use, BTU/h, approximation of room sizes, and hours of use. He then set out to visit 32 facilities operated by 5 different public agencies. In total, he inventoried more than 700 ACs through site visits at: police precincts, fire departments, homeless shelters, health facilities, criminal courts and a borough hall. He managed to create a financial model that presented the economics of upgrading window ACs and helped the energy managers at these agencies apply for one of DCAS DEM’s funding program.

By replacing around half of the ACs Salman surveyed, DCAS could save around 43 metric tons of carbon emissions, reduce 47KW of on-peak and 47KW of off-peak load, save 145,500 kWh of energy, and secure $160,000 in financial incentives through the utility. DCAS and the Agencies will be better equipped to scale up this plan throughout the larger city of New York. 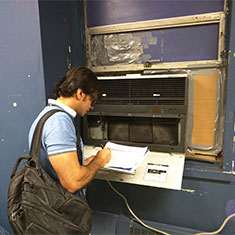 Syed Salman Tariq is a MPA candidate at Columbia University, focusing on Energy & Environment. Prior to graduate school, he worked in Pakistan at a power utility, a health/education based not-for-profit and a Waste-to-Energy startup, which developed his interest in social transformations through clean and efficient energy projects.