Environmental Defense Fund (EDF) enlisted Kunnal Singh as an EDF Climate Corps fellow for the summer of 2015. Several years ago, the EDF team developed the Climate Corps Financial Analysis Tool (CCFAT) to support fellows in financial valuation of their energy efficiency recommendations. Singh was tasked with reviewing the model’s assumptions and updating the model so that it could be used to evaluate several new types of energy efficiency and renewable energy projects.

After reviewing the present CCFAT model, Singh suggested improvements to assumptions such as investment horizon, useful life of the projects and labor and installation costs so that they would be more in line with the General Accepted Accounting Principles (GAAP) of the United States. Furthermore, Singh developed new project valuation models for energy efficiency upgrades such as lighting, motors, pumps, adjustable frequency drives and boilers, which are mainly used in buildings and industrial applications. After extensive market research, Singh also developed models for financing on-site renewable energy technologies such as solar photovoltaic (solar PV) and wind turbines for energy generation.

The project valuation models developed by Singh have been tested by several EDF Climate Corps’ Alumni and 2015 fellows, and it has received good feedback. These new energy efficiency and renewable energy models will be a key tool for the incoming 2016 fellows to use to estimate project costs, energy savings and benchmark projects based on financial and energy performance metrics. Thus, Singh’s work should ensure that future EDF Climate Corps fellows have the capability to identify projects that can have significant energy and financial savings for their host organizations. 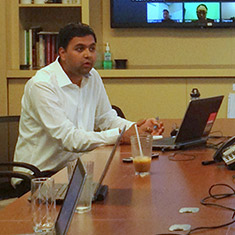 College of William and Mary

Kunnal Singh is an MBA candidate at The College of William and Mary. He has four years of sustainability consulting experience at PricewaterhouseCoopers. Post MBA, Kunnal aspires to utilize his academic knowledge and professional experience in the field of Financial Advisory and Management Consulting.