Ryan Whisnant developed a plan to cut energy use at SunGard and save $5 million annually.

Ryan Whisnant, a joint MBA/MS student at the University of Michigan, spent the summer as an EDF Climate Corps fellow at SunGard, an IT services company headquartered outside Philadelphia. He was tasked with finding energy efficiency opportunities.

Although SunGard had implemented a fair number of energy efficiency measures at its headquarters before Whisnant started his EDF Climate Corps fellowship, his diligent attention uncovered lighting timer errors that resulted in 1/3 of the open floor lighting remaining on during non-business hours. According to Whisnant, fixing this problem in just one building could save SunGard nearly $20,000 annually. Whisnant also developed a plan to cut energy use in the company's headquarters by 25 percent, through lighting retrofits and HVAC upgrades.

If implemented across the company's 7 million square feet of office space worldwide, Whisnant's plan could cut SunGard's energy bills by over $5 million annually. 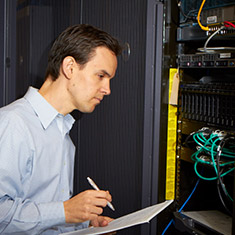 Ryan Whiznant, a student at the University of Michigan, was hired as the 2009 EDF Climate Corps fellow at SunGard.